The NDC code 0009-3169 is assigned by the FDA to the product Prostin Vr Pediatric which is a human prescription drug product labeled by Pharmacia And Upjohn Company Llc. The generic name of Prostin Vr Pediatric is alprostadil. The product's dosage form is injection, solution and is administered via intravascular; intravenous form. The product is distributed in a single package with assigned NDC code 0009-3169-06 5 ampule in 1 package / 1 ml in 1 ampule (0009-3169-01). This page includes all the important details about this product, including active and inactive ingredients, pharmagologic classes, product uses and characteristics, UNII information, RxNorm crosswalk and the complete product label.

What are the uses for Prostin Vr Pediatric?


Why is alprostadil urogenital medication prescribed?
Alprostadil injection and suppositories are used to treat certain types of erectile dysfunction (impotence; inability to get or keep an erection) in men. Alprostadil inje...
[Read More]


Apnea is experienced by about 10 to 12% of neonates with congenital heart defects treated with PROSTIN VR PEDIATRIC Sterile Solution. Apnea is most often seen in neonates weighing less than 2 kg at birth and usually appears during the first hour of drug infusion. Therefore, respiratory status should be monitored throughout treatment, and PROSTIN VR PEDIATRIC should be used where ventilatory assistance is immediately available.

Alprostadil is a white to off-white crystalline powder with a melting point between 110° and 116°C. Its solubility at 35°C is 8000 micrograms per 100 mL double distilled water.


Alprostadil (prostaglandin E1) is one of a family of naturally occurring acidic lipids with various pharmacologic effects. Vasodilation, inhibition of platelet aggregation, and stimulation of intestinal and uterine smooth muscle are among the most notable of these effects. Intravenous doses of 1 to 10 micrograms of alprostadil per kilogram of body weight lower the blood pressure in mammals by decreasing peripheral resistance. Reflex increases in cardiac output and rate accompany the reduction in blood pressure.

Smooth muscle of the ductus arteriosus is especially sensitive to alprostadil, and strips of lamb ductus markedly relax in the presence of the drug. In addition, administration of alprostadil reopened the closing ductus of new-born rats, rabbits, and lambs. These observations led to the investigation of alprostadil in infants who had congenital defects which restricted the pulmonary or systemic blood flow and who depended on a patent ductus arteriosus for adequate blood oxygenation and lower body perfusion.

In infants with restricted pulmonary blood flow, about 50% responded to alprostadil infusion with at least a 10 torr increase in blood pO2 (mean increase about 14 torr and mean increase in oxygen saturation about 23%). In general, patients who responded best had low pretreatment blood pO2 and were 4 days old or less.

Alprostadil must be infused continuously because it is very rapidly metabolized. As much as 80% of the circulating alprostadil may be metabolized in one pass through the lungs, primarily by β- and ω- oxidation. The metabolites are excreted primarily by the kidney, and excretion is essentially complete within 24 hours after administration. No unchanged alprostadil has been found in the urine, and there is no evidence of tissue retention of alprostadil or its metabolites.


PROSTIN VR PEDIATRIC Sterile Solution is indicated for palliative, not definitive, therapy to temporarily maintain the patency of the ductus arteriosus until corrective or palliative surgery can be performed in neonates who have congenital heart defects and who depend upon the patent ductus for survival. Such congenital heart defects include pulmonary atresia, pulmonary stenosis, tricuspid atresia, tetralogy of Fallot, interruption of the aortic arch, coarctation of the aorta, or transposition of the great vessels with or without other defects.

In infants with restricted pulmonary blood flow, the increase in blood oxygenation is inversely proportional to pretreatment pO2 values; that is, patients with low pO2 values respond best, and patients with pO2 values of 40 torr or more usually have little response.

PROSTIN VR PEDIATRIC should be administered only by trained personnel in facilities that provide pediatric intensive care.

NOTE: PROSTIN VR PEDIATRIC Sterile Solution must be diluted before it is administered. See dilution instructions in DOSAGE AND ADMINISTRATION section.

The administration of PROSTIN VR PEDIATRIC to neonates may result in gastric outlet obstruction secondary to antral hyperplasia. This effect appears to be related to duration of therapy and cumulative dose of the drug. Neonates receiving PROSTIN VR PEDIATRIC at recommended doses for more than 120 hours should be closely monitored for evidence of antral hyperplasia and gastric outlet obstruction.

In infants treated with PROSTIN VR PEDIATRIC at the usual doses for 10 hours to 12 days and who died of causes unrelated to ductus structural weakness, tissue sections of the ductus and pulmonary arteries have shown intimal lacerations, a decrease in medial muscularity and disruption of the medial and internal elastic lamina. Localized and aneurysmal dilatations and vessel wall edema also were seen compared to a series of pathological specimens from infants not treated with PROSTIN VR PEDIATRIC. The incidence of such structural alterations has not been defined.

PROSTIN VR PEDIATRIC should not be used in neonates with respiratory distress syndrome. A differential diagnosis should be made between respiratory distress syndrome (hyaline membrane disease) and cyanotic heart disease (restricted pulmonary blood flow). If full diagnostic facilities are not immediately available, cyanosis (pO2 less than 40 torr) and restricted pulmonary blood flow apparent on an X-ray are appropriate indicators of congenital heart defects.


In all neonates, arterial pressure should be monitored intermittently by umbilical artery catheter, auscultation, or with a Doppler transducer. Should arterial pressure fall significantly, decrease the rate of infusion immediately.


No drug interactions have been reported between PROSTIN VR PEDIATRIC and the therapy standard in neonates with restricted pulmonary or systemic blood flow. Standard therapy includes antibiotics, such as penicillin and gentamicin; vasopressors, such as dopamine and isoproterenol; cardiac glycosides; and diuretics, such as furosemide.


Long-term carcinogenicity studies and fertility studies have not been done. The Ames and Alkaline Elution assays reveal no potential for mutagenesis.


Apnea has been reported in about 12% of the neonates treated. (See WARNING box.) Other common adverse reactions reported have been fever in about 14% of the patients treated and seizures in about 4%. The following reactions have been reported in less than 1% of the patients: cerebral bleeding, hyperextension of the neck, hyperirritability, hypothermia, jitteriness, lethargy, and stiffness.


The most common adverse reactions reported have been flushing in about 10% of patients (more common after intraarterial dosing), bradycardia in about 7%, hypotension in about 4%, tachycardia in about 3%, cardiac arrest in about 1%, and edema in about 1%. The following reactions have been reported in less than 1% of the patients: congestive heart failure, hyperemia, second degree heart block, shock, spasm of the right ventricle infundibulum, supraventricular tachycardia, and ventricular fibrillation.


The following reactions have been reported in less than 1% of the patients: bradypnea, bronchial wheezing, hypercapnia, respiratory depression, respiratory distress, and tachypnea.

The most common adverse reaction reported has been diarrhea in about 2% of the patients. The following reactions have been reported in less than 1% of the patients: gastric regurgitation, and hyperbilirubinemia.


The most common hematologic event reported has been disseminated intravascular coagulation in about 1% of the patients. The following events have been reported in less than 1% of the patients: anemia, bleeding, and thrombocytopenia.


Anuria and hematuria have been reported in less than 1% of the patients.


Cortical proliferation of the long bones has been reported. See PRECAUTIONS.


Apnea, bradycardia, pyrexia, hypotension, and flushing may be signs of drug overdosage. If apnea or bradycardia occurs, discontinue the infusion, and provide appropriate medical treatment. Caution should be used in restarting the infusion. If pyrexia or hypotension occurs, reduce the infusion rate until these symptoms subside. Flushing is usually a result of incorrect intraarterial catheter placement, and the catheter should be repositioned.


The preferred route of administration for PROSTIN VR PEDIATRIC Sterile Solution is continuous intravenous infusion into a large vein. Alternatively, PROSTIN VR PEDIATRIC may be administered through an umbilical artery catheter placed at the ductal opening. Increases in blood pO2 (torr) have been the same in neonates who received the drug by either route of administration.


To prepare infusion solutions, dilute 1 mL of PROSTIN VR PEDIATRIC Sterile Solution with Sodium Chloride Injection USP or Dextrose Injection USP. Undiluted PROSTIN VR PEDIATRIC Sterile Solution may interact with the plastic sidewalls of volumetric infusion chambers causing a change in the appearance of the chamber and creating a hazy solution. Should this occur, the solution and the volumetric infusion chamber should be replaced. 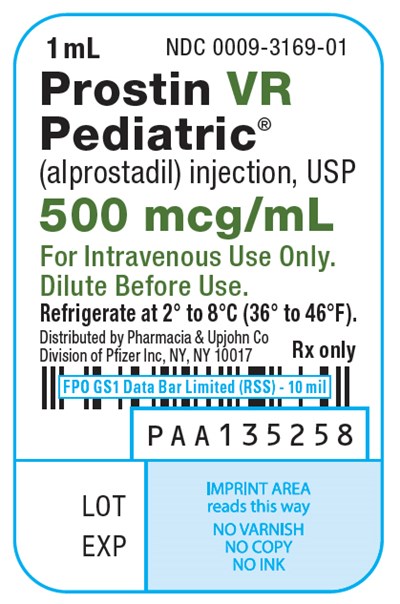 FOR INTRAVASCULAR USE ONLY