The NDC code 0023-6151 is assigned by the FDA to the product Crinone which is a human prescription drug product labeled by Allergan, Inc.. The generic name of Crinone is progesterone. The product's dosage form is gel and is administered via vaginal form. The product is distributed in a single package with assigned NDC code 0023-6151-08 15 applicator in 1 carton / 1.125 g in 1 applicator. This page includes all the important details about this product, including active and inactive ingredients, pharmagologic classes, product uses and characteristics, UNII information, RxNorm crosswalk and the complete product label.

What are the uses for Crinone?

This medication is used to treat infertility in women who do not make enough of a certain natural hormone called progesterone. Progesterone works by preparing the lining of the womb to receive a fertilized egg. This hormone is needed to maintain pregnancy. This medication is also used to restore menstrual cycles in women whose cycles have stopped.

What are Crinone Active Ingredients?


Crinone® (progesterone gel) is a bioadhesive vaginal gel containing micronized progesterone in an emulsion system, which is contained in single use, polypropylene vaginal applicators. The carrier vehicle is an oil in water emulsion containing the water swellable, but insoluble polymer, polycarbophil. The progesterone is partially soluble in both the oil and water phase of the vehicle, with the majority of the progesterone existing as a suspension. Physically, Crinone has the appearance of a soft, white to off-white gel.

The active ingredient, progesterone, is present in either a 4% or an 8% concentration (w/w). The chemical name for progesterone is pregn-4-ene-3,20-dione. It has an empirical formula of C21H30O2 and a molecular weight of 314.5.

The structural formula is: 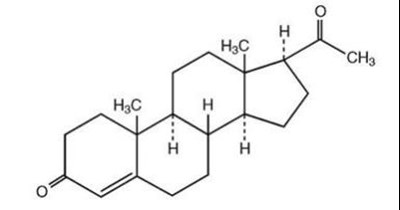 Progesterone exists in two polymorphic forms. Form 1, which is the form used in Crinone, exists as white orthorhombic prisms with a melting point of 127-131°C.


Progesterone is a naturally occurring steroid that is secreted by the ovary, placenta, and adrenal gland. In the presence of adequate estrogen, progesterone transforms a proliferative endometrium into a secretory endometrium. Progesterone is essential for the development of decidual tissue, and the effect of progesterone on the differentiation of glandular epithelia and stroma has been extensively studied. Progesterone is necessary to increase endometrial receptivity for implantation of an embryo. Once an embryo is implanted, progesterone acts to maintain the pregnancy. Normal or near-normal endometrial responses to oral estradiol and intramuscular progesterone have been noted in functionally agonadal women through the sixth decade of life. Progesterone administration decreases the circulatory levels of gonadotropins.

The multiple dose pharmacokinetics of Crinone 4% and Crinone 8% administered every other day and Crinone 8% administered daily or twice daily for 12 days were studied in 10 healthy, estrogenized postmenopausal women in two separate studies. Steady state was achieved within the first 24 hours after initiation of treatment. The pharmacokinetic parameters (mean ± standard deviation) after the last administration of Crinone 4% or 8% derived from these studies are shown in Table 2.


In a single-center, open-label study (COL1620-007US), 99 women (aged 28-47 years) with either partial (n = 84) or premature ovarian failure (n = 15) who were candidates to receive a donor oocyte transfer as an Assisted Reproductive Technology ("ART") procedure were randomized to receive either Crinone 8% twice daily (n = 68) or intramuscular progesterone 100 mg daily (n = 31). The study was divided into three phases (Pilot, Donor Egg and Treatment). The first phase of the study consisted of a test Pilot Cycle to ensure that the administration of transdermal estradiol and progesterone would adequately prime the endometrium to receive the donor egg. The second phase was the Donor Egg Cycle during which a fertilized oocyte was implanted. Crinone 8% was administered beginning the evening of Day 14 of the Pilot and Donor Egg cycles. Subjects with partial ovarian function also underwent a Pre-Pilot Cycle and a Pre-Donor Egg Cycle during which time they were administered only leuprolide acetate to suppress remaining ovarian function. The Pre-Pilot Cycle, Pilot Cycle, Pre-Donor Egg Cycle, and Donor Egg Cycle each lasted approximately 34 days. The third phase of the study consisted of a 10-week treatment period to maintain a pregnancy until placental autonomy was achieved.

Sixty-one women received Crinone 8% as part of the Pilot Cycle to determine their endometrial response. Of the 55 evaluable endometrial biopsies in the Crinone 8% group performed on Day 25 to 27, all were histologically "in-phase", consistent with luteal phase biopsy specimens of menstruating women at comparable time intervals. Fifty-four women who received Crinone 8% and had a histologically "in-phase" biopsy received a donor oocyte transfer. Among these 54 Crinone-treated women, clinical pregnancies (assessed about week 10 after transfer by clinical examination, ultrasound and/or ß-hCG levels) occurred in 26 women (48%).  Seventeen women (31%) delivered a total of 25 newborns, seven women (13%) had spontaneous abortions and two women (4%) had elective abortions.

In a study of 61 women with ovarian failure undergoing a donor oocyte transfer procedure receiving Crinone 8% twice daily, treatment-emergent adverse events occurring in 5% or more of the women are shown in Table 3.

In a second clinical study of 139 women using Crinone 8% once daily for luteal phase support while undergoing an in vitro fertilization procedure, treatment-emergent adverse events reported in ≥ 5% of the women are shown in Table 4.

In three studies, 127 women with secondary amenorrhea received estrogen replacement therapy and Crinone 4% or 8% every other day for six doses. Treatment-emergent adverse events during estrogen and Crinone treatment that occurred in 5% or more of women are shown in Table 5.

Estrogen therapy was continuous for the entire three 28-day cycle studies. At Day 15 of the second cycle (six weeks after initiating estrogen replacement), women who demonstrated adequate response to estrogen therapy (by ultrasound) and who continued to be amenorrheic received Crinone every other day for six doses (Day 15 through Day 25 of the cycle).

It is important to note that a dosage increase from the 4% gel can only be accomplished by using the 8% gel. Increasing the volume of gel administered does not increase the amount of progesterone absorbed.

Crinone 8% is indicated for progesterone supplementation or replacement as part of an Assisted Reproductive Technology ("ART") treatment for infertile women with progesterone deficiency.


Crinone should not be used in individuals with any of the following conditions:


The physician should be alert to the earliest manifestations of thrombotic disorders (thrombophlebitis, cerebrovascular disorders, pulmonary embolism, and retinal thrombosis). Should any of these occur or be suspected, the drug should be discontinued immediately.

Progesterone and progestins have been used to prevent miscarriage in women with a history of recurrent spontaneous pregnancy losses. No adequate evidence is available to show that they are effective for this purpose.


The product should not be used concurrently with other local intravaginal therapy. If other local intravaginal therapy is to be used concurrently, there should be at least a 6-hour period before or after Crinone administration. Small, white globules may appear as a vaginal discharge possibly due to gel accumulation, even several days after usage.


No drug interactions have been assessed with Crinone.


Nonclinical toxicity studies to determine the potential of Crinone to cause carcinogenicity or mutagenicity have not been performed. The effect of Crinone on fertility has not been evaluated in animals.

Crinone 8% has been used to support embryo implantation and maintain pregnancies through its use as part of ART treatment regimens in two clinical studies (studies COL1620-007US and COL1620-F01). In the first study (COL1620-007US), 54 Crinone-treated women had donor oocyte transfer procedures, and clinical pregnancies occurred in 26 women (48%). The outcomes of these 26 pregnancies were as follows: one woman had an elective termination of pregnancy at 19 weeks due to congenital malformations (omphalocele) associated with a chromosomal abnormality; one woman pregnant with triplets had an elective termination of her pregnancy; seven women had spontaneous abortions; and 17 women delivered 25 apparently normal newborns.

In the second study (COL1620-F01), Crinone 8% was used in the luteal phase support of women undergoing in vitro fertilization ("IVF") procedures. In this multi-center, open-label study, 139 women received Crinone 8% once daily beginning within 24 hours of embryo transfer and continuing through Day 30 post-transfer.

Clinical pregnancies assessed at Day 90 post-transfer were seen in 36 (26%) of women. Thirty-two women (23%) delivered newborns and four women (3%) had spontaneous abortions. Of the 47 newborns delivered, one had a teratoma associated with a cleft palate; one had respiratory distress syndrome; 44 were apparently normal and one was lost to follow-up.


The safety and effectiveness in geriatric patients (over age 65) have not been established.


Detectable amounts of progestins have been identified in the milk of mothers receiving them. The effect of this on the nursing infant has not been determined.


There have been no reports of overdosage with Crinone. In the case of overdosage, however, discontinue Crinone, treat the patient symptomatically, and institute supportive measures.

As with all prescription drugs, this medicine should be kept out of the reach of children.


Crinone is available in the following strengths:

4% gel (45 mg) in a single use, disposable, white polypropylene vaginal applicator with a teal twist-off cap. Each applicator contains 1.3 g of gel and delivers 1.125 g of gel.

8% gel (90 mg) in a single use, disposable, white polypropylene vaginal applicator with a teal twist-off cap. Each applicator contains 1.3 g of gel and delivers 1.125 g of gel.

Each applicator is wrapped and sealed in a foil overwrap.

Keep out of reach of children. 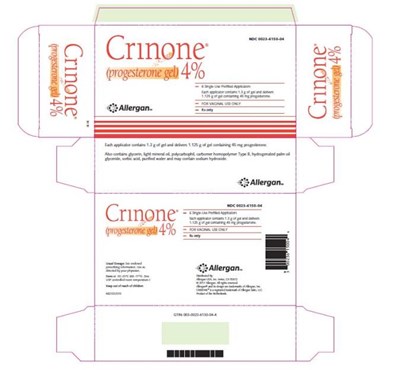