Amphetamines have a high potential for abuse. Administration of amphetamines for prolonged periods of time may lead to drug dependence. Pay particular attention to the possibility of subjects obtaining amphetamines for non-therapeutic use or distribution to others and the drugs should be prescribed or dispensed sparingly [see DRUG ABUSE AND DEPENDENCE (9)].

Misuse of amphetamine may cause sudden death and serious cardiovascular adverse reactions.


MAS-ER Capsules® are indicated for the treatment of attention deficit hyperactivity disorder (ADHD).

2.1 Dosing Considerations For All Patients


Individualize the dosage according to the therapeutic needs and response of the patient. Administer MAS-ER Capsules at the lowest effective dosage.

Based on bioequivalence data, patients taking divided doses of immediate-release ADDERALL®, (for example, twice daily), may be switched to MAS-ER Capsules at the same total daily dose taken once daily. Titrate at weekly intervals to appropriate efficacy and tolerability as indicated.

MAS-ER Capsules may be taken with or without food.

MAS-ER Capsules should be given upon awakening. Afternoon doses should be avoided because of the potential for insomnia.

Where possible, MAS-ER Capsule therapy should be interrupted occasionally to determine if there is a recurrence of behavioral symptoms sufficient to require continued therapy.


The recommended starting dose for adolescents with ADHD who are 13-17 years of age and are either starting treatment for the first time or switching from another medication is 10 mg/day. The dose may be increased to 20 mg/day after one week if ADHD symptoms are not adequately controlled.


In adults with ADHD who are either starting treatment for the first time or switching from another medication, the recommended dose is 20 mg/day.


MAS-ER Capsules are available as:


MAS-ER Capsule administration is contraindicated in patients with the following conditions:


Monitor growth in children during treatment with stimulants. Patients who are not growing or gaining weight as expected may need to have their treatment interrupted.

Careful follow-up of weight and height in children ages 7 to 10 years who were randomized to either methylphenidate or non-medication treatment groups over 14 months, as well as in naturalistic subgroups of newly methylphenidate-treated and non-medication treated children over 36 months (to the ages of 10 to 13 years), suggests that consistently medicated children (i.e., treatment for 7 days per week throughout the year) have a temporary slowing in growth rate (on average, a total of about 2 cm less growth in height and 2.7 kg less growth in weight over 3 years), without evidence of growth rebound during this period of development.

In a controlled trial of MAS-ER Capsules in adolescents, mean weight change from baseline within the initial 4 weeks of therapy was –1.1 lbs. and –2.8 lbs., respectively, for patients receiving 10 mg and 20 mg MAS-ER Capsules. Higher doses were associated with greater weight loss within the initial 4 weeks of treatment. Chronic use of amphetamines can be expected to cause a similar suppression of growth.


Stimulants, including MAS-ER Capsules, used to treat ADHD are associated with peripheral vasculopathy, including Raynaud's phenomenon.  Signs and symptoms are usually intermittent and mild; however, very rare sequelae include digital ulceration and/or soft tissue breakdown.  Effects of peripheral vasculopathy, including Raynaud's phenomenon, were observed in post-marketing reports at different times and at therapeutic doses in all age groups throughout the course of treatment.  Signs and symptoms generally improve after reduction in dose or discontinuation of drug.  Careful observation for digital changes is necessary during treatment with ADHD stimulants.  Further clinical evaluation (e.g., rheumatology referral) may be appropriate for certain patients.


Difficulties with accommodation and blurring of vision have been reported with stimulant treatment.


The least amount of amphetamine feasible should be prescribed or dispensed at one time in order to minimize the possibility of overdosage. MAS-ER Capsules should be used with caution in patients who use other sympathomimetic drugs.

Adverse reactions during exposure were obtained primarily by general inquiry and recorded by clinical investigators using terminology of their own choosing. Consequently, it is not possible to provide a meaningful estimate of the proportion of individuals experiencing adverse reactions without first grouping similar types of reactions into a smaller number of standardized event categories. In the tables and listings that follow, COSTART terminology has been used to classify reported adverse reactions.

The stated frequencies of adverse reactions represent the proportion of individuals who experienced, at least once, a treatment-emergent adverse event of the type listed.

6.2 Adverse Reactions Associated With The Use Of Amphetamine, Mas-Er Capsules, Or Adderall®


The following adverse reactions have been associated with the use of amphetamine, MAS-ER Capsules, or ADDERALL®:


PPIs act on proton pumps by blocking acid production, thereby reducing gastric acidity. When MAS-ER Capsules (20 mg single-dose) was administered concomitantly with the proton pump inhibitor, omeprazole (40 mg once daily for 14 days), the median Tmax of d-amphetamine was decreased by 1.25 hours (from 4 to 2.75 hours), and the median Tmax of l-amphetamine was decreased by 2.5 hours (from 5.5 to 3 hours), compared to MAS-ER Capsules administered alone. The AUC and Cmax of each moiety were unaffected. Therefore, co-administration of MAS-ER Capsules and proton pump inhibitors should be monitored for changes in clinical effect.


Amphetamines can cause a significant elevation in plasma corticosteroid levels. This increase is greatest in the evening. Amphetamines may interfere with urinary steroid determinations.


The effects of MAS-ER Capsules on labor and delivery in humans is unknown.


Amphetamines are excreted in human milk. Mothers taking amphetamines should be advised to refrain from nursing.


MAS-ER Capsules are indicated for use in children 6 years of age and older.

In a juvenile developmental study, rats received daily oral doses of amphetamine (d to l enantiomer ratio of 3:1, the same as in MAS-ER Capsules) of 2, 6, or 20 mg/kg on days 7-13 of age; from day 14 to approximately day 60 of age these doses were given b.i.d. for total daily doses of 4, 12, or 40 mg/kg. The latter doses are approximately 0.6, 2, and 6 times the maximum recommended human dose for children of 30 mg/day, on a mg/m2 basis. Post dosing hyperactivity was seen at all doses; motor activity measured prior to the daily dose was decreased during the dosing period but the decreased motor activity was largely absent after an 18 day drug-free recovery period. Performance in the Morris water maze test for learning and memory was impaired at the 40 mg/kg dose, and sporadically at the lower doses, when measured prior to the daily dose during the treatment period; no recovery was seen after a 19 day drug-free period. A delay in the developmental milestones of vaginal opening and preputial separation was seen at 40 mg/kg but there was no effect on fertility.


MAS-ER Capsules have not been studied in the geriatric population.


Amphetamines have been extensively abused. Tolerance, extreme psychological dependence, and severe social disability have occurred. There are reports of patients who have increased the dosage to levels many times higher than recommended. Abrupt cessation following prolonged high dosage administration results in extreme fatigue and mental depression; changes are also noted on the sleep EEG. Manifestations of chronic intoxication with amphetamines may include severe dermatoses, marked insomnia, irritability, hyperactivity, and personality changes. The most severe manifestation of chronic intoxication is psychosis, often clinically indistinguishable from schizophrenia.


Amphetamines are non-catecholamine sympathomimetic amines with CNS stimulant activity. The mode of therapeutic action in ADHD is not known. Amphetamines are thought to block the reuptake of norepinephrine and dopamine into the presynaptic neuron and increase the release of these monoamines into the extraneuronal space.

The time to reach maximum plasma concentration (Tmax) for MAS-ER Capsules is about 7 hours, which is about 4 hours longer compared to ADDERALL® (immediate-release). This is consistent with the extended-release nature of the product. 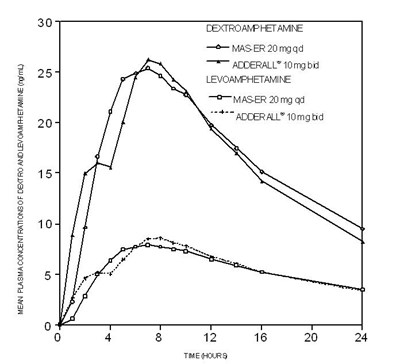 
No evidence of carcinogenicity was found in studies in which d,l-amphetamine (enantiomer ratio of 1:1) was administered to mice and rats in the diet for 2 years at doses of up to 30 mg/kg/day in male mice, 19 mg/kg/day in female mice, and 5 mg/kg/day in male and female rats. These doses are approximately 2.4, 1.5, and 0.8 times, respectively, the maximum recommended human dose for children of 30 mg/day, on a mg/m2 body surface area basis.

Amphetamine, in the enantiomer ratio present in MAS-ER Capsules (d- to l- ratio of 3:1), was not clastogenic in the mouse bone marrow micronucleus test in vivo and was negative when tested in the E. coli component of the Ames test in vitro. d,l-Amphetamine (1:1 enantiomer ratio) has been reported to produce a positive response in the mouse bone marrow micronucleus test, an equivocal response in the Ames test, and negative responses in the in vitro sister chromatid exchange and chromosomal aberration assays.

Amphetamine, in the enantiomer ratio present in MAS-ER Capsules (d- to l- ratio of 3:1), did not adversely affect fertility or early embryonic development in the rat at doses of up to 20 mg/kg/day (approximately 8 times the maximum recommended human dose for adolescents of 20 mg/day, on a mg/m2 body surface area basis).


Acute administration of high doses of amphetamine (d- or d,l-) has been shown to produce long-lasting neurotoxic effects, including irreversible nerve fiber damage, in rodents. The significance of these findings to humans is unknown.


MAS-ER Capsules are available as:


Advise patients that MAS-ER Capsules are a federally controlled substance because it can be abused or lead to dependence. Additionally, emphasize that MAS-ER Capsules should be stored in a safe place to prevent misuse and/or abuse. Evaluate patient history (including family history) of abuse or dependence on alcohol, prescription medicines, or illicit drugs [see DRUG ABUSE AND DEPENDENCE (9)].


Prior to initiating treatment with MAS-ER Capsules, adequately screen patients with comorbid depressive symptoms to determine if they are at risk for bipolar disorder. Such screening should include a detailed psychiatric history, including a family history of suicide, bipolar disorder, and/or depression. Additionally, MAS-ER Capsule therapy at usual doses may cause treatment-emergent psychotic or manic symptoms in patients without prior history of psychotic symptoms or mania [see WARNINGS AND PRECAUTIONS (5.2)].


Instruct patients beginning treatment with MAS-ER Capsules about the risk of peripheral vasculopathy, including Raynaud's Phenomenon, and in associated signs and symptoms: fingers or toes may feel numb, cool, painful, and/or may change color from pale, to blue, to red.  Instruct patients to report to their physician any new numbness, pain, skin color change, or sensitivity to temperature in fingers or toes.  Instruct patients to call their physician immediately with any signs of unexplained wounds appearing on fingers or toes while taking MAS-ER Capsules.  Further clinical evaluation (e.g., rheumatology referral) may be appropriate for certain patients [see WARNINGS AND PRECAUTIONS (5.5)].


Monitor growth in children during treatment with MAS-ER Capsules, and patients who are not growing or gaining weight as expected may need to have their treatment interrupted [see WARNINGS AND PRECAUTIONS (5.3)].


Advise patients not to breast feed if they are taking MAS-ER Capsules [see USE IN SPECIFIC POPULATIONS (8.3)].

17.9 Impairment In Ability To Operate Machinery Or Vehicles


MAS-ER Capsules may impair the ability of the patient to engage in potentially hazardous activities such as operating machinery or vehicles; the patient should therefore be cautioned accordingly.

Pharmacist: Medication Guide to be dispensed to patients

ADDERALL XR® is a registered trademark of Shire LLC.

ADDERALL® is a registered trademark of Shire LLC, under license to Duramed Pharmaceuticals, Inc.