The NDC code 0406-1219 is assigned by the FDA to the product Amphetamine Sulfate which is a human prescription drug product labeled by Specgx Llc. The product's dosage form is tablet and is administered via oral form. The product is distributed in a single package with assigned NDC code 0406-1219-01 100 tablet in 1 bottle . This page includes all the important details about this product, including active and inactive ingredients, pharmagologic classes, product uses and characteristics, UNII information, RxNorm crosswalk and the complete product label.

What are the uses for Amphetamine Sulfate?

This medication is used to treat attention deficit hyperactivity disorder - ADHD. It works by changing the amounts of certain natural substances in the brain. Amphetamine belongs to a class of drugs known as stimulants. It can help increase your ability to pay attention, stay focused on an activity, and control behavior problems. It may also help you to organize your tasks and improve listening skills. This medication is also used to treat a certain sleeping disorder (narcolepsy) to help you stay awake during the day. It should not be used to treat tiredness or to hold off sleep in people who do not have a sleep disorder. Amphetamine may also be used along with a doctor-approved, reduced-calorie diet to help significantly overweight (obese) people lose weight. It should only be used for a short time (a few weeks) in people who have not lost enough weight with other treatments (such as dieting, other drugs, group programs). It may work by decreasing your appetite.

What are Amphetamine Sulfate Active Ingredients?


AMPHETAMINES HAVE A HIGH POTENTIAL FOR ABUSE. ADMINISTRATION OF AMPHETAMINES FOR PROLONGED PERIODS OF TIME MAY LEAD TO DRUG DEPENDENCE AND MUST BE AVOIDED. PARTICULAR ATTENTION SHOULD BE PAID TO THE POSSIBILITY OF SUBJECTS OBTAINING AMPHETAMINES FOR NON-THERAPEUTIC USE OR DISTRIBUTION TO OTHERS, AND THE DRUGS SHOULD BE PRESCRIBED OR DISPENSED SPARINGLY.

MISUSE OF AMPHETAMINE MAY CAUSE SUDDEN DEATH AND SERIOUS CARDIOVASCULAR ADVERSE EVENTS.


Amphetamine sulfate is a sympathomimetic amino of the amphetamine group. It is a white, odorless crystalline powder. It has a slightly bitter taste. Its solutions are acid to litmus, having a pH of 5 to 8. It is freely soluble in water, slightly soluble in alcohol and practically insoluble in ether. 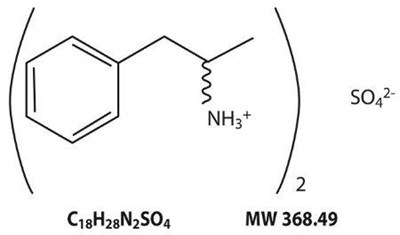 Amphetamine, as the racemic form, differs from dextroamphetamine in a number of ways. The l-isomer is more potent than the d-isomer in cardiovascular activity, but much less potent in causing CNS excitatory effects. The racemic mixture also is less effective as an appetite suppressant when compared to dextroamphetamine. There is neither specific evidence which clearly establishes the mechanism whereby amphetamines produce mental and behavioral effects in children, nor conclusive evidence regarding how those effects relate to the condition of the central nervous system.

Drugs in this class used in obesity are commonly known as "anorectics" or "anorexigenics." It has not been established, however, that the action of such drugs in treating obesity is primarily one of appetite suppression. Other central nervous system actions or metabolic effects, may be involved, for example. Adult obese subjects instructed in dietary management and treated with "anorectic" drugs lose more weight on the average than these treated with placebo and diet, as determined in relatively short-term clinical trials.

The magnitude of increased weight loss of drug-treated patients over placebo-treated patients is only a fraction of a pound a week. The rate of weight loss is greatest in the first weeks of therapy for both drug and placebo subjects and tends to decrease in succeeding weeks. The origins of the increased weight loss due to the various possible drug effects are not established. The amount of weight loss associated with the use of an "anorectic" drug varies from trial to trial, and the increased weight loss appears to be related in part to variables other than the drug prescribed, such as the physician-investigator, the population treated, and the diet prescribed. Studies do not permit conclusions as to the relative importance of the drug and nondrug factors on weight loss.

The natural history of obesity is measured in years, whereas the studies cited are restricted to few weeks duration; thus, the total impact of drug-induced weight loss over that of diet alone must be considered clinically limited.


Amphetamine sulfate tablets are indicated for:

Patients with a history of drug abuse.

During or within 14 days following the administration of monoamine oxidase inhibitors (hypertensive crises may result).


Careful follow-up of weight and height in children ages 7 to 10 years who were randomized to either methylphenidate or non-medication treatment groups over 14 months, as well as in naturalistic subgroups of newly methylphenidate-treated and non-medication treated children over 36 months (to the ages of 10 to 13 years), suggests that consistently medicated children (i.e., treatment for 7 days per week throughout the year) have a temporary slowing in growth rate (on average, a total of about 2 cm less growth in height and 2.7 kg less growth in weight over 3 years), without evidence of growth rebound during this period of development. Published data are inadequate to determine whether chronic use of amphetamines may cause a similar suppression of growth, however, it is anticipated that they likely have this effect as well. Therefore, growth should be monitored during treatment with stimulants, and patients who are not growing or gaining height or weight as expected may need to have their treatment interrupted.


Stimulants, including amphetamine sulfate tablets, used to treat ADHD are associated with peripheral vasculopathy, including Raynaud's phenomenon. Signs and symptoms are usually intermittent and mild; however, very rare sequelae include digital ulceration and/or soft tissue breakdown. Effects of peripheral vasculopathy, including Raynaud's phenomenon, were observed in post-marketing reports at different times and at therapeutic doses in all age groups throughout the course of treatment. Signs and symptoms generally improve after reduction in dose or discontinuation of drug. Careful observation for digital changes is necessary during treatment with ADHD stimulants. Further clinical evaluation (e.g., rheumatology referral) may be appropriate for certain patients.


Serotonin syndrome, a potentially life-threatening reaction, may occur when amphetamines are used in combination with other drugs that affect the serotonergic neurotransmitter systems such as monoamine oxidase inhibitors (MAOIs), selective serotonin reuptake inhibitors (SSRIs), serotonin norepinephrine reuptake inhibitors (SNRIs), triptans, tricyclic antidepressants, fentanyl, lithium, tramadol, tryptophan, buspirone, and St. John's Wort (see DRUG INTERACTIONS). Amphetamines and amphetamine derivatives are known to be metabolized, to some degree, by cytochrome P450 2D6 (CYP2D6) and display minor inhibition of CYP2D6 metabolism (see CLINICAL PHARMACOLOGY). The potential for a pharmacokinetic interaction exists with the co-administration of CYP2D6 inhibitors which may increase the risk with increased exposure to amphetamine sulfate tablets. In these situations, consider an alternative non-serotonergic drug or an alternative drug that does not inhibit CYP2D6 (see DRUG INTERACTIONS).

Concomitant use of amphetamine sulfate tablets with MAOI drugs is contraindicated (see CONTRAINDICATIONS).


Difficulties with accommodation and blurring of vision have been reported with stimulant treatment.


Caution is to be exercised in prescribing amphetamines for patients with even mild hypertension.

The least amount feasible should be prescribed or dispensed at one time in order to minimize the possibility of overdosage.


Amphetamines may impair the ability of the patient to engage in potentially hazardous activities such as operating machinery or vehicle; the patient should therefore be cautioned accordingly.


Amphetamines can cause a significant elevation in plasma corticosteroid levels. This increase is greatest in the evening. Amphetamines may interfere with urinary steroid determinations.


Mutagenicity studies and long term studies in animals to determine the carcinogenic potential of amphetamine sulfate have not been performed.


Amphetamines are excreted in human milk. Mothers taking amphetamines should be advised to refrain from nursing.


Long-term effects of amphetamines in children have not been well established.

Clinical experience suggests that in psychotic children, administration of amphetamines may exacerbate symptoms of behavior disturbance and thought disorder.

Data is inadequate to determine whether chronic administration of amphetamines may be associated with growth inhibition; therefore growth should be monitored during treatment. Drug treatment is not indicated in all cases of Attention Deficit Disorder with Hyperactivity and should be considered only in light of the complete history and evaluation of the child. The decision to prescribe amphetamines should depend on the physician's assessment of the chronicity and severity of the child's symptoms and their appropriateness for his/her age. Prescription should not depend solely on the presence of one or more of the behavioral characteristics.

When these symptoms are associated with acute stress reactions, treatment with amphetamines is usually not indicated.


Palpitations, tachycardia, elevation of blood pressure. There have been isolated reports of cardiomyopathy associated with chronic amphetamine use.


Dryness of the mouth, unpleasant taste, diarrhea, constipation and other gastrointestinal disturbances. Anorexia and weight loss may occur as undesirable effects when amphetamines are used for other than the anorectic effect.


Impotence, changes in libido, and frequent or prolonged erections.


Amphetamine sulfate tablets are a Schedule II controlled substance. Amphetamines have been extensively abused. Tolerance, extreme psychological dependence, and severe social disability have occurred. There are reports of patients who have increased the dosage to many times the recommended. Abrupt cessation following prolonged high dosage administration results in extreme fatigue and mental depression; changes are also noted on the sleep EEG. Manifestations of chronic intoxication with amphetamines include severe dermatosis, marked insomnia, irritability, hyperactivity and personality changes. The most severe manifestation of chronic intoxication is psychosis, often clinically indistinguishable from schizophrenia. This is rare with oral amphetamines.


Individual patient response to amphetamines varies widely. While toxic symptoms occasionally occur as an idiosyncrasy at doses as low as 2 mg, they are rare with doses of less than 15 mg; 30 mg can produce severe reactions, yet doses of 400 to 500 mg are not necessarily fatal.

In rats, the oral LD50 of dextroamphetamine sulfate is 96.8 mg/kg.


Management of acute amphetamine intoxication is largely symptomatic and includes gastric lavage and sedation with a barbiturate. Experience with hemodialysis or peritoneal dialysis is inadequate to permit recommendation in this regard. Acidification of the urine increases amphetamine excretion. If acute, severe hypertension complicates amphetamine overdosage, administration of intravenous phentolamine has been suggested. However, a gradual drop in blood pressure will usually result when sufficient sedation has been achieved. Chlorpromazine antagonizes the central stimulant effects of amphetamines and can be used to treat amphetamine intoxication.


Regardless of indication, amphetamine should be administered at the lowest effective dosage and dosage should be individually adjusted. Late evening doses should be avoided because of resulting insomnia.


Usual dose is 5 to 60 milligrams per day in divided doses depending on the individual patient response.


Not recommended for children under 3 years of age.

In children from 3 to 5 years of age, start with 2.5 mg daily; daily dosage may be raised in increments of 2.5 mg at weekly intervals until optimal response is obtained.

In children 6 years of age or older, start with 5 mg once or twice daily; daily dosage may be raised in increments of 5 mg at weekly intervals until optimal response is obtained. Only in rare cases will it be necessary to exceed a total of 40 milligrams per day.

With tablets give first dose on awakening; additional doses (1 to 2) at intervals of 4 to 6 hours.

Where possible, drug administration should be interrupted occasionally to determine if there is a recurrence of behavioral symptoms sufficient to require continued therapy.

Not recommended for this use in children under 12 years of age.

Pharmacist: Dispense the Medication Guide
provided separately to each patient.

Pharmacist: Dispense the Medication Guide
provided separately to each patient.