What are the uses for Diethylpropion Hydrochloride?

What are Diethylpropion Hydrochloride Active Ingredients?

Diethylpropion is pronounced as (dye eth il proe' pee on)


Why is diethylpropion medication prescribed?
Diethylpropion decreases appetite. It is used on a short-term basis (a few weeks), in combination with diet, to help you lose weight.This medication is sometimes prescrib...
[Read More]

Its chemical structure is: 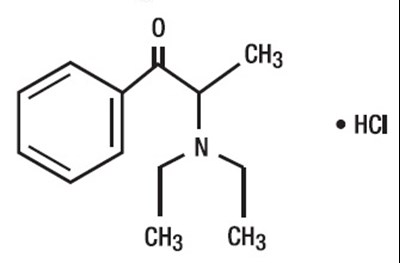 
Diethylpropion hydrochloride is a sympathomimetic amine with some pharmacologic activity similar to that of the prototype drugs of this class used in obesity, the amphetamines. Actions include some central nervous system stimulation and elevation of blood pressure. Tolerance has been demonstrated with all drugs of this class in which these phenomena have been looked for.

Drugs of this class used in obesity are commonly known as "anorectics" or "anorexigenics." It has not been established, however, that the action of such drugs in treating obesity is primarily one of appetite suppression. For example, other central nervous system actions or metabolic effects may be involved. Adult obese subjects instructed in dietary management and treated with "anorectic" drugs lose more weight on the average than those treated with placebo and diet, as determined in relatively short-term clinical trials. The magnitude of increased weight loss of drug-treated patients over placebo-treated patients averages some fraction of a pound a week. However, individual weight loss may vary substantially from patient to patient. The rate of weight loss is greatest in the first weeks of therapy for both drug and placebo subjects and tends to decrease in succeeding weeks. The possible origins of the increased weight loss due to the various drug effects are not established. The amount of weight loss associated with the use of an "anorectic" drug varies from trial to trial, and the increased weight loss appears to be related in part to variables other than the drug prescribed, such as the physician/investigator relationship, the population treated, and the diet prescribed. Studies do not permit conclusions as to the relative importance of the drug and non-drug factors on weight loss.

The natural history of obesity is measured in years, whereas most studies cited are restricted to a few weeks duration; thus, the total impact of drug-induced weight loss over that of diet alone is unknown. Diethylpropion is rapidly absorbed from the GI tract after oral administration and is extensively metabolized through a complex pathway of biotransformation involving N-dealkylation and reduction. Many of these metabolites are biologically active and may participate in the therapeutic action of diethylpropion hydrochloride. Due to the varying lipid solubilities of these metabolites, their circulating levels are affected by urinary pH. Diethylpropion and/or its active metabolites are believed to cross the blood-brain barrier and the placenta.

Diethylpropion and its metabolites are excreted mainly by the kidney. It has been reported that between 75-106% of the dose is recovered in the urine within 48 hours after dosing. Using a phosphorescence assay that is specific for basic compounds containing a benzoyl group, the plasma half-life of the aminoketone metabolites is estimated to be between 4 to 6 hours.


Diethylpropion hydrochloride is indicated in the management of exogenous obesity as a short-term adjunct (a few weeks) in a regimen of weight reduction based on caloric restriction in patients with an initial body mass index (BMI) of 30 kg/m2 or higher and who have not responded to appropriate weight reducing regimen (diet and/or exercise) alone. Below is a chart of BMI based on various heights and weights. BMI is calculated by taking the patient’s weight, in kilograms (kg), divided by the patient’s height, in meters (m), squared. Metric conversions are as follows: pounds divided by 2.2 = kg; inches x 0.0254 = meters.

The usefulness of agents of this class (see CLINICAL PHARMACOLOGY) should be measured against possible risk factors inherent in their use such as those described below. Diethylpropion hydrochloride is indicated for use as monotherapy only.

Patients with a history of drug abuse.

Use in combination with other anorectic agents is contraindicated.

During or within 14 days following the administration of monoamine oxidase inhibitors, hypertensive crises may result.


Diethylpropion hydrochloride should not be used in combination with other anorectic agents, including prescribed drugs, over-the-counter preparations, and herbal products.

The onset or aggravation of exertional dyspnea, or unexplained symptoms of angina pectoris, syncope, or lower extremity edema suggest the possibility of occurrence of pulmonary hypertension. Under these circumstances, diethylpropion hydrochloride should be immediately discontinued, and the patient should be evaluated for the possible presence of pulmonary hypertension.

Valvular heart disease associated with the use of some anorectic agents such as fenfluramine and dexfenfluramine has been reported. Possible contributing factors include use for extended periods of time, higher than recommended dose, and/or use in combination with other anorectic drugs. Valvulopathy has been very rarely reported with diethylpropion hydrochloride monotherapy, but the causal relationship remains uncertain. The potential risk of possible serious adverse effects such as valvular heart disease and pulmonary hypertension should be assessed carefully against the potential benefit of weight loss. Baseline cardiac evaluation should be considered to detect preexisting valvular heart diseases or pulmonary hypertension prior to initiation of diethylpropion hydrochloride treatment. Diethylpropion hydrochloride is not recommended in patients with known heart murmur or valvular heart disease. Echocardiogram during and after treatment could be useful for detecting any valvular disorders which may occur.

To limit unwarranted exposure and risks, treatment with diethylpropion hydrochloride should be continued only if the patient has satisfactory weight loss within the first 4 weeks of treatment (e.g., weight loss of at least 4 pounds, or as determined by the physician and patient).

Diethylpropion hydrochloride is not recommended for patients who used any anorectic agents within the prior year.

If tolerance develops, the recommended dose should not be exceeded in an attempt to increase the effect; rather, the drug should be discontinued. Diethylpropion hydrochloride may impair the ability of the patient to engage in potentially hazardous activities such as operating machinery or driving a motor vehicle; the patient should therefore be cautioned accordingly.

Prolonged use of diethylpropion hydrochloride may induce dependence with withdrawal syndrome on cessation of therapy. Hallucinations have occurred rarely following high doses of the drug. Several cases of toxic psychosis have been reported following the excessive use of the drug and some have been reported in which the recommended dose appears not to have been exceeded. Psychosis abated after the drug was discontinued.

When central nervous system active agents are used, consideration must always be given to the possibility of adverse interactions with alcohol.

The least amount feasible should be prescribed or dispensed at one time in order to minimize the possibility of overdosage.


Because diethylpropion hydrochloride is a monoamine, hypertension may result when this agent is used with monoamine oxidase (MAO) inhibitors (see CONTRAINDICATIONS).

Antidiabetic drug requirements (i.e., insulin) may be altered. Concurrent use with general anesthetics may result in arrhythmias. The pressor effects of diethylpropion and those of other drugs may be additive when the drugs are used concomitantly; conversely, diethylpropion may interfere with antihypertensive drugs (i.e., guanethidine, α-methyldopa). Concurrent use of phenothiazines may antagonize the anorectic effect of diethylpropion.


No long-term animal studies have been done to evaluate diethylpropion hydrochloride for carcinogenicity. Mutagenicity studies have not been conducted. Animal reproduction studies have revealed no evidence of impairment of fertility (see Pregnancy).


Teratogenic Effects: Pregnancy Category B. Reproduction studies have been performed in rats at doses up to 1.6 times the human dose (based on mg/m2) and have revealed no evidence of impaired fertility or harm to the fetus due to diethylpropion hydrochloride. There are, however, no adequate and well-controlled studies in pregnant women. Because animal reproduction studies are not always predictive of human response, this drug should be used during pregnancy only if clearly needed.

Spontaneous reports of congenital malformations have been recorded in humans, but no causal relationship to diethylpropion has been established.

Nonteratogenic Effects. Abuse with diethylpropion hydrochloride during pregnancy may result in withdrawal symptoms in the human neonate.


Clinical studies of diethylpropion hydrochloride did not include sufficient numbers of subjects aged 65 and over to determine whether they respond differently from younger subjects. Other reported clinical experience has not identified differences in responses between the elderly and younger patients. In general, dose selection for an elderly patient should be cautious, usually starting at the low end of the dosing range, reflecting the greater frequency of decreased hepatic, renal, or cardiac function, and of concomitant disease or other drug therapy.

This drug is known to be substantially excreted by the kidney, and the risk of toxic reactions to this drug may be greater in patients with impaired renal function. Because elderly patients are more likely to have decreased renal function, care should be taken in dose selection, and it may be useful to monitor renal function.


Cardiovascular: Precordial pain, arrhythmia (including ventricular), ECG changes, tachycardia, elevation of blood pressure, palpitation and rare reports of pulmonary hypertension. Valvular heart disease associated with the use of some anorectic agents such as fenfluramine and dexfenfluramine, both independently and especially when used in combination, have been reported. Valvulopathy has been very rarely reported with diethylpropion hydrochloride monotherapy, but the causal relationship remains uncertain.

Miscellaneous: A variety of miscellaneous adverse reactions has been reported by physicians. These include complaints such as dysuria, dyspnea, hair loss, muscle pain, increased sweating, and polyuria.


Diethylpropion hydrochloride is a schedule IV controlled substance. Diethylpropion hydrochloride has some chemical and pharmacologic similarities to the amphetamines and other related stimulant drugs that have been extensively abused. There have been reports of subjects becoming psychologically dependent on diethylpropion. The possibility of abuse should be kept in mind when evaluating the desirability of including a drug as part of a weight reduction program. Abuse of amphetamines and related drugs may be associated with varying degrees of psychologic dependence and social dysfunction which, in the case of certain drugs, may be severe. There are reports of patients who have increased the dosage to many times that recommended. Abrupt cessation following prolonged high dosage administration results in extreme fatigue and mental depression; changes are also noted on the sleep EEG. Manifestations of chronic intoxication with anorectic drugs include severe dermatoses, marked insomnia, irritability, hyperactivity, and personality changes. The most severe manifestation of chronic intoxication is psychosis, often clinically indistinguishable from schizophrenia.

Management of acute diethylpropion hydrochloride intoxication is largely symptomatic and includes lavage and sedation with a barbiturate. Experience with hemodialysis or peritoneal dialysis is inadequate to permit recommendation in this regard. Intravenous phentolamine (Regitine®) has been suggested on pharmacologic grounds for possible acute, severe hypertension, if this complicates diethylpropion hydrochloride overdosage.

One immediate-release 25 mg tablet three times daily, one hour before meals, and in midevening if desired to overcome night hunger.


This drug is known to be substantially excreted by the kidney, and the risk of toxic reactions to this drug may be greater in patients with impaired renal function. Because elderly patients are more likely to have decreased renal function, care should be taken in dose selection, and it may be useful to monitor renal function. (See PRECAUTIONS, Geriatric Use.)

Each white to off white, round flat tablets debossed “K 44” on one side and plain on the other side.