Enulose is a human prescription drug product labeled by Actavis Pharma, Inc.. The generic name of Enulose is lactulose. The product's dosage form is solution and is administered via oral; rectal form.

What are the uses for Enulose?

This drug is used by mouth or rectally to treat or prevent complications of liver disease (hepatic encephalopathy). It does not cure the problem, but may help to improve mental status. Lactulose is a colonic acidifier that works by decreasing the amount of ammonia in the blood. It is a man-made sugar solution.

What are Enulose Active Ingredients?


Why is lactulose medication prescribed?
Lactulose is a synthetic sugar used to treat constipation. It is broken down in the colon into products that pull water out from the body and into the colon. This water s...
[Read More]


Lactulose is a synthetic disaccharide in solution form for oral or rectal administration.

Lactulose is a colonic acidifier for treatment and prevention of portal-systemic encephalopathy.

The chemical name for lactulose is 4-O-β-D-galactopyranosyl-D-fructofuranose. It has the following structural formula: 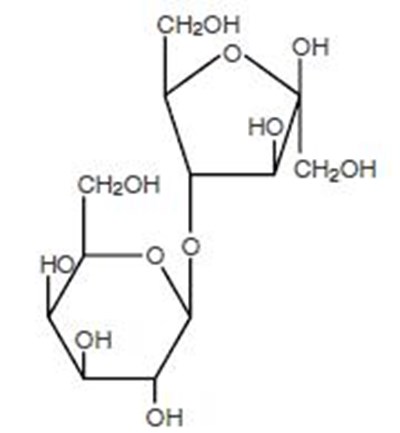 The molecular weight is 342.30. It is freely soluble in water.


Lactulose causes a decrease in blood ammonia concentration and reduces the degree of portalsystemic encephalopathy. These actions are considered to be results of the following:

Bacterial degradation of lactulose in the colon acidifies the colonic contents.

The acid colonic contents convert NH3 to the ammonium ion (NH4)+, trapping it and preventing its absorption.

The laxative action of the metabolites of lactulose then expels the trapped ammonium ion from the colon.

Experimental data indicate that lactulose is poorly absorbed. Lactulose given orally to man and experimental animals resulted in only small amounts reaching the blood. Urinary excretion has been determined to be 3% or less and is essentially complete within 24 hours.

When incubated with extracts of human small intestinal mucosa, lactulose was not hydrolyzed during a 24-hour period and did not inhibit the activity of these extracts on lactose. Lactulose reaches the colon essentially unchanged. There it is metabolized by bacteria with the formation of low molecular weight acids that acidify the colon contents.


For the prevention and treatment of portal-systemic encephalopathy, including the stages of hepatic pre-coma and coma.

Controlled studies have shown that lactulose solution therapy reduces the blood ammonia levels by 25 to 50%; this is generally paralleled by an improvement in the patients' mental state and by an improvement in EEG patterns. The clinical response has been observed in about 75% of patients, which is at least as satisfactory as that resulting from neomycin therapy. An increase in patients' protein tolerance is also frequently observed with lactulose therapy. In the treatment of chronic portal-systemic encephalopathy, Lactulose has been given for over 2 years in controlled studies.


Since lactulose solution contains galactose (less than 1.6 g/15 mL), it is contraindicated in patients who require a low galactose diet.


A theoretical hazard may exist for patients being treated with lactulose solution who may be required to undergo electrocautery procedures during proctoscopy or colonoscopy. Accumulation of H2 gas in significant concentration in the presence of an electrical spark may result in an explosive reaction. Although this complication has not been reported with lactulose, patients on lactulose therapy undergoing such procedures should have a thorough bowel cleansing with a non-fermentable solution. Insufflation of CO2 as an additional safeguard may be pursued but is considered to be a redundant measure.

In the overall management of portal-systemic encephalopathy, it should be recognized that there is serious underlying liver disease with complications such as electrolyte disturbance (e.g., hypokalemia) for which other specific therapy may be required.


There have been conflicting reports about the concomitant use of neomycin and lactulose solution. Theoretically, the elimination of certain colonic bacteria by neomycin and possibly other anti-infective agents may interfere with the desired degradation of lactulose and thus prevent the acidification of colonic contents. Thus the status of the lactulose-treated patient should be closely monitored in the event of concomitant oral anti-infective therapy.

Results of preliminary studies in humans and rats suggest that nonabsorbable antacids given concurrently with lactulose may inhibit the desired lactulose-induced drop in colonic pH. Therefore, a possible lack of desired effect of treatment should be taken into consideration before such drugs are given concomitantly with lactulose.

Other laxatives should not be used, especially during the initial phase of therapy for portal-systemic encephalopathy, because the loose stools resulting from their use may falsely suggest that adequate lactulose dosage has been achieved.


There are no known human data on long-term potential for carcinogenicity, mutagenicity, or impairment of fertility.

There are no known animal data on long-term potential for mutagenicity.

Administration of lactulose solution in the diet of mice for 18 months in concentrations of 3 and 10 percent (v/w) did not produce any evidence of carcinogenicity.

In studies of mice, rats, and rabbits, doses of lactulose solution up to 6 or 12 mL/kg/day produced no deleterious effects in breeding, conception, or parturition.

Pregnancy category B. Reproduction studies have been performed in mice, rats, and rabbits at doses up to 2 or 4 times the usual human oral dose and have revealed no evidence of impaired fertility or harm to the fetus due to lactulose. There are, however, no adequate and well-controlled studies in pregnant women. Because animal reproduction studies are not always predictive of human response, this drug should be used during pregnancy only if clearly needed.


Very little information on the use of lactulose in pediatric patients has been recorded (see DOSAGE AND ADMINISTRATION).


Precise frequency data are not available.

Lactulose may produce gaseous distention with flatulence or belching and abdominal discomfort such as cramping in about 20% of patients. Excessive dosage can lead to diarrhea with potential complications such as loss of fluids, hypokalemia, and hypernatremia.

Nausea and vomiting have been reported.

To report SUSPECTED ADVERSE EVENTS, contact the FDA at 1-800-FDA-1088 or http://www.fda.gov/ for voluntary reporting of adverse reactions.

There have been no reports of accidental overdosage. In the event of overdosage, it is expected that diarrhea and abdominal cramps would be the major symptoms. Medication should be terminated.

Dialysis: Dialysis data are not available for lactulose. Its molecular similarity to sucrose, however, would suggest that it should be dialyzable.

Adult: The usual adult, oral dosage is 2 to 3 tablespoonfuls (30 to 45 ml, containing 20 g to 30 g of lactulose) three or four times daily. The dosage may be adjusted every day or two to produce 2 or 3 soft stools daily.

Hourly doses of 30 to 45 ml of Lactulose may be used to induce the rapid laxation indicated in the initial phase of the therapy of portal-systemic encephalopathy. When the laxative effect has been achieved, the dose of lactulose may then be reduced to the recommended daily dose.

Improvement in the patient's condition may occur within 24 hours but may not begin before 48 hours or even later.

Continuous long-term therapy is indicated to lessen the severity and prevent the recurrence of portal-systemic encephalopathy. The dose of lactulose for this purpose is the same as the recommended daily dose.

Very little information on the use of lactulose in young children and adolescents has been recorded. As with adults, the subjective goal in proper treatment is to produce 2 to 3 soft stools daily. On the basis of information available, the recommended initial daily oral dose in infants is 2.5 to 10 ml in divided doses.

For older children and adolescents, the total daily dose is 40 to 90 ml. If the initial dose causes diarrhea, the dose should be reduced immediately. If diarrhea persists, lactulose should be discontinued.

When the adult patient is in the impending coma or coma stage of portal-systemic encephalopathy and the danger of aspiration exists, or when the necessary endoscopic or intubation procedures physically interfere with the administration of the recommended oral doses, lactulose solution may be given as a retention enema via a rectal balloon catheter. Cleansing enemas containing soapsuds or other alkaline agents should not be used.

Three hundred ml of lactulose solution should be mixed with 700 mL of water or physiologic saline and retained for 30 to 60 minutes. Lactulose enema may be repeated every 4 to 6 hours. If the enema is inadvertently evacuated too promptly, it may be repeated immediately.

The goal of treatment is reversal of the coma stage in order that the patient may be able to take oral medication. Reversal of coma may take place within 2 hours of the first enema in some patients. Lactulose, given orally in the recommended doses, should be started before Lactulose by enema is stopped entirely.


Lactulose Solution USP, 10 g/15 ml, is a natural colored and an unflavored solution supplied in one pint (473 ml) bottles.

Under recommended storage conditions, a normal darkening of color may occur. Such darkening is characteristic of sugar solutions and does not affect therapeutic action. Prolonged exposure to temperatures above 86°F (30°C) or to direct light may cause extreme darkening and turbidity which may be pharmaceutically objectionable. If this condition develops, do not use.

Prolonged exposure to freezing temperatures may cause change to a semi-solid, too viscous to pour. Viscosity will return to normal upon warming to room temperature.

Dispense in a tight, light-resistant container as defined in the USP, with a child-resistant closure. 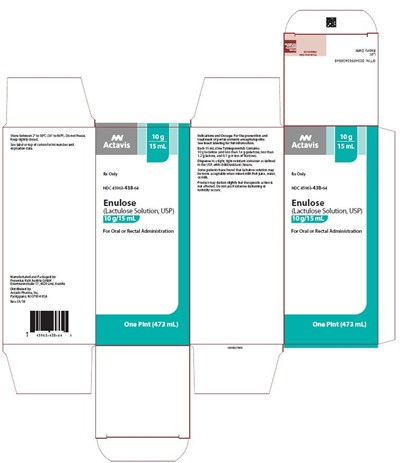