The NDC code 72572-015 is assigned by the FDA to the product Aminocaproic Acid which is a human prescription drug product labeled by Civica, Inc.. The product's dosage form is injection, solution and is administered via intravenous form. The product is distributed in a single package with assigned NDC code 72572-015-25 25 vial, multi-dose in 1 tray / 20 ml in 1 vial, multi-dose (72572-015-01). This page includes all the important details about this product, including active and inactive ingredients, pharmagologic classes, product uses and characteristics, UNII information, RxNorm crosswalk and the complete product label.

What are the uses for Aminocaproic Acid?

This medication is used to help control bleeding due to a condition where your blood does not clot the way it normally should (fibrinolysis). This may cause serious bleeding after certain surgeries or in certain conditions (such as bleeding disorders, liver disease, cancer). Aminocaproic acid works by helping your blood clot normally. It belongs to a class of drugs known as antifibrinolytics.

What are Aminocaproic Acid Active Ingredients?


Aminocaproic Acid is 6-aminohexanoic acid, which acts as an inhibitor of fibrinolysis.  The structural formula is:

Aminocaproic Acid is soluble in water, acid and alkaline solutions; it is sparingly soluble in methanol and practically insoluble in chloroform.

Aminocaproic Acid Injection, USP, for intravenous administration, is a sterile pyrogen-free solution containing 250 mg/mL of Aminocaproic Acid with Benzyl Alcohol 0.9%, as a preservative, and Water for Injection q.s.  The pH is adjusted to approximately 6.8 with Hydrochloric Acid and/or Sodium Hydroxide.


The fibrinolysis-inhibitory effects of aminocaproic acid appear to be exerted principally via inhibition of plasminogen activators and to a lesser degree through antiplasmin activity.

In adults, oral absorption appears to be a zero-order process with an absorption rate of 5.2 g/hr. The mean lag time in absorption is 10 minutes. After a single oral dose of 5 g, absorption was complete (F=1). Mean ± SD peak plasma concentrations (164 ± 28 mcg/mL) were reached within 1.2 ± 0.45 hours.

Renal excretion is the primary route of elimination, whether aminocaproic acid is administered orally or intravenously. Sixty-five percent of the dose is recovered in the urine as unchanged drug and 11% of the dose appears as the metabolite adipic acid.  Renal clearance (116 mL/min) approximates endogenous creatinine clearance. The total body clearance is 169 mL/min. The terminal elimination half-life for aminocaproic acid is approximately 2 hours.


Aminocaproic Acid Injection is useful in enhancing hemostasis when fibrinolysis contributes to bleeding. In life-threatening situations, fresh whole blood transfusions, fibrinogen infusions, and other emergency measures may be required.

Fibrinolytic bleeding may frequently be associated with surgical complications following heart surgery (with or without cardiac bypass procedures), and portacaval shunt; hematological disorders such as aplastic anemia; acute and life-threatening abruptio placentae; hepatic cirrhosis; and neoplastic disease such as carcinoma of the prostate, lung, stomach, and cervix.


Aminocaproic acid should not be used when there is evidence of an active intravascular clotting process.

When there is uncertainty as to whether the cause of bleeding is primary fibrinolysis or disseminated intravascular coagulation (DIC), this distinction must be made before administering aminocaproic acid.

The following tests can be applied to differentiate the two conditions:

Aminocaproic acid must not be used in the presence of DIC without concomitant heparin.

Rarely, skeletal muscle weakness with necrosis of muscle fibers has been reported following prolonged administration.  Clinical presentation may range from mild myalgias with weakness and fatigue to a severe proximal myopathy with rhabdomyolysis, myoglobinuria, and acute renal failure. Muscle enzymes, especially creatine phosphokinase (CPK) are elevated.  CPK levels should be monitored in patients on long-term therapy.  Aminocaproic acid administration should be stopped if a rise in CPK is noted.  Resolution follows discontinuation of aminocaproic acid; however, the syndrome may recur if aminocaproic acid is restarted.

The possibility of cardiac muscle damage should also be considered when skeletal myopathy occurs. One case of cardiac and hepatic lesions observed in man has been reported.  The patient received 2 g of aminocaproic acid every 6 hours for a total dose of 26 g.  Death was due to continued cerebrovascular hemorrhage.  Necrotic changes in the heart and liver were noted at autopsy.


Aminocaproic acid inhibits both the action of plasminogen activators and to a lesser degree, plasmin activity.  The drug should NOT be administered without a definite diagnosis and/or laboratory finding indicative of hyperfibrinolysis (hyperplasminemia).*

Rapid intravenous administration of the drug should be avoided since this may induce hypotension, bradycardia, and/or arrhythmia.

Inhibition of fibrinolysis by aminocaproic acid may theoretically result in clotting or thrombosis.  However, there is no definite evidence that administration of aminocaproic acid has been responsible for the few reported cases of intravascular clotting which followed this treatment.  Rather, it appears that such intravascular clotting was most likely due to the patient’s preexisting clinical condition, e.g., the presence of DIC.  It has been postulated that extravascular clots formed in vivo may not undergo spontaneous lysis as do normal clots.

Reports have appeared in the literature of an increased incidence of certain neurological deficits such as hydrocephalus, cerebral ischemia, or cerebral vasospasm associated with the use of antifibrinolytic agents in the treatment of subarachnoid hemorrhage (SAH).  All of these events have also been described as part of the natural course of SAH, or as a consequence of diagnostic procedures such as angiography.  Drug relatedness remains unclear.

Thrombophlebitis, a possibility with all intravenous therapy, should be guarded against by strict attention to the proper insertion of the needle and the fixing of its position.

Epsilon-aminocaproic acid should not be administered with Factor IX Complex concentrates or Anti-Inhibitor Coagulant concentrates, as the risk of thrombosis may be increased.


The use of aminocaproic acid should be accompanied by tests designed to determine the amount of fibrinolysis present.  There are presently available: (a) general tests such as those for the determination of the lysis of a clot of blood or plasma; and (b) more specific tests for the study of various phases of fibrinolytic mechanisms. These latter tests include both semiquantitative and quantitative techniques for the determination of profibrinolysin, fibrinolysin, and antifibrinolysin.


Long-term studies in animals to evaluate the carcinogenic potential of aminocaproic acid and studies to evaluate its mutagenic potential have not been conducted.  Dietary administration of an equivalent of the maximum human therapeutic dose of aminocaproic acid to rats of both sexes impaired fertility as evidenced by decreased implantations, litter sizes and number of pups born.


Aminocaproic acid is generally well tolerated. The following adverse experiences have been reported:

Urogenital: BUN increased, renal failure. There have been some reports of dry ejaculation during the period of aminocaproic acid treatment. These have been reported to date only in hemophilia patients who received the drug after undergoing dental surgical procedures. However, this symptom resolved in all patients within 24 to 48 hours of completion of therapy.


A few cases of acute overdosage with aminocaproic acid administered intravenously have been reported. The effects have ranged from no reaction to transient hypotension to severe acute renal failure leading to death. One patient with a history of brain tumor and seizures experienced seizures after receiving an 8 gram bolus injection of aminocaproic acid. The single dose of aminocaproic acid causing symptoms of overdosage or considered to be life-threatening is unknown. Patients have tolerated doses as high as 100 grams while acute renal failure has been reported following a dose of 12 grams.

For the treatment of acute bleeding syndromes due to elevated fibrinolytic activity, it is suggested that 16 to 20 mL (4 to 5 g) of Aminocaproic Acid Injection, USP in 250 mL of diluent be administered by infusion during the first hour of treatment, followed by a continuing infusion at the rate of 4 mL (1 g) per hour in 50 mL of diluent.  This method of treatment would ordinarily be continued for about 8 hours or until the bleeding situation has been controlled.

For intravenous infusion after dilution.

For intravenous use after dilution. 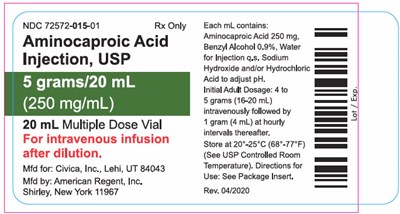 For intravenous infusion after dilution.