The NDC code 0093-3186 is assigned by the FDA to the product Penciclovir which is a human prescription drug product labeled by Teva Pharmaceuticals Usa, Inc.. The product's dosage form is cream and is administered via topical form. The product is distributed in a single package with assigned NDC code 0093-3186-20 1 tube in 1 carton / 5 g in 1 tube. This page includes all the important details about this product, including active and inactive ingredients, pharmagologic classes, product uses and characteristics, UNII information, RxNorm crosswalk and the complete product label.

What are the uses for Penciclovir?

This medication is used to treat "cold sores/fever blisters" (herpes labialis). It can speed up healing of the sores and decrease symptoms (such as tingling, pain, burning, itching). Penciclovir belongs to a class of medications known as antivirals. It works by stopping the growth of the virus. This medication does not cure herpes, and it does not prevent passing the infection to someone else. It does not prevent future occurrences.

What are Penciclovir Active Ingredients?


Penciclovir cream 1% is a deoxynucleoside analog HSV DNA polymerase inhibitor indicated for the treatment of recurrent herpes labialis (cold sores) in adults and children 12 years of age or older.


Apply penciclovir cream 1% every 2 hours during waking hours for a period of 4 days. Start treatment as early as possible (i.e., during the prodrome or when lesions appear).


Penciclovir cream 1% is supplied in a 5 gram tube containing 10 mg of penciclovir per gram in a cream base, which is equivalent to 1% (w/w).


Penciclovir is contraindicated in patients with known hypersensitivity to the product or any of its components.


Penciclovir should only be used on herpes labialis on the lips and face. Because no data are available, application to human mucous membranes is not recommended. Particular care should be taken to avoid application in or near the eyes since it may cause irritation. Lesions that do not improve or that worsen on therapy should be evaluated for secondary bacterial infection. The effect of penciclovir has not been established in immunocompromised patients.

In two double-blind, placebo-controlled trials, 1,516 patients were treated with penciclovir cream and 1,541 with placebo. One or more local adverse reactions were reported by 3% of the patients treated with penciclovir cream and 4% of placebo-treated patients. The rates of reported local adverse reactions are shown in Table 1.

Two studies, enrolling 108 healthy subjects, were conducted to evaluate the dermal tolerance of 5% penciclovir cream (a 5-fold higher concentration than the commercial formulation) compared to vehicle using repeated occluded patch testing methodology. The 5% penciclovir cream induced mild erythema in approximately one-half of the subjects exposed, an irritancy profile similar to the vehicle control in terms of severity and proportion of subjects with a response. No evidence of sensitization was observed.


The following adverse reactions have been identified during post-approval use of penciclovir. Because these reactions are reported voluntarily from a population of uncertain size, it is not always possible to reliably estimate their frequency or establish a causal relationship to drug exposure.

The following events have been identified from worldwide postmarketing use of penciclovir in treatment of recurrent herpes labialis (cold sores) in adults. These events have been chosen for inclusion due to a combination of their seriousness, frequency of reporting, or potential causal connection to penciclovir.

Penciclovir is not absorbed systemically following topical administration and maternal use is not expected to result in fetal exposure to the drug.

Penciclovir is not absorbed systemically by the mother following topical administration and breastfeeding is not expected to result in exposure of the child to penciclovir.


An open-label, uncontrolled trial with penciclovir cream 1% was conducted in 102 subjects, ages 12 to 17 years, with recurrent herpes labialis. The frequency of adverse events was generally similar to the frequency previously reported for adult patients. Safety and effectiveness in pediatric patients less than 12 years of age have not been established.


In 74 subjects ≥65 years of age, the adverse events profile was comparable to that observed in younger patients.


Since penciclovir is poorly absorbed following oral administration, adverse reactions related to penciclovir ingestion are unlikely. There is no information on overdose.

Chemically, penciclovir is known as 9-[4-hydroxy-3-(hydroxymethyl)butyl] guanine. Its molecular formula is C10H15N5O3; its molecular weight is 253.26. It is a synthetic acyclic guanine derivative and has the following structure: 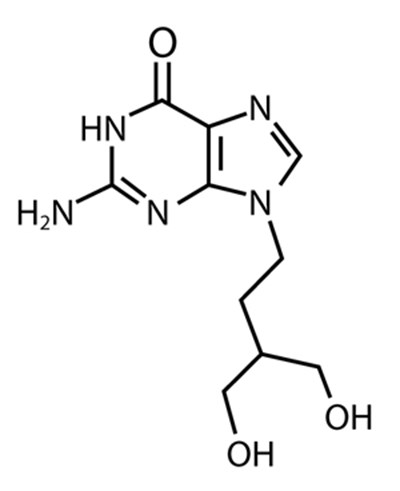 
Measurable penciclovir concentrations were not detected in plasma or urine of healthy male volunteers (n=12) following single or repeat application of the 1% cream at a dose of 180 mg penciclovir daily (approximately 67 times the estimated usual clinical dose).

Pediatric Patients: The systemic absorption of penciclovir following topical administration has not been evaluated in patients <18 years of age.

Antiviral Activity: In cell culture studies, penciclovir has antiviral activity against the following herpes viruses: HSV-1 and HSV-2. The antiviral activity of penciclovir against wild type strains grown on human foreskin fibroblasts was assessed with a plaque reduction assay and staining with crystal violet 3 days post-infection for HSV. The median EC50 values of penciclovir against laboratory and clinical isolates of HSV-1 and HSV-2 were 2 µM (range 1.2 to 2.4 µM, n=7) and 2.6 µM (range 1.6 to 11 µM, n=6), respectively.

Penciclovir-resistant HSV-1 and HSV-2 strains were isolated in cell culture. Penciclovir-­ resistant mutants of HSV resulted from mutations in the viral thymidine kinase (TK) and DNA polymerase (POL) genes. Frameshifts were commonly isolated and result in premature truncation of the HSV TK product with decreased enzymatic activity and consequent decreased susceptibility to penciclovir. Mutations in the viral TK gene may lead to complete loss of TK activity (TK negative), reduced levels of TK activity (TK partial), or alteration in the ability of viral TK to phosphorylate the drug without an equivalent loss in the ability to phosphorylate thymidine (TK altered). In cell culture, the following resistance-associated substitutions in TK of HSV-1 and HSV-2 were observed: HSV-1 TK G6C, F13L, H142Y, G200D, L205S, S254Stop, V267G, and T287M; HSV-2 TK G39E, F191L, E226K, and T288M. The median EC50 values observed in a plaque reduction assay with penciclovir resistant HSV-1 and HSV-2 were 69 μM (range 14 to 115 μM, n=6) and 46 μM (range 4 to >395 μM, n=9), respectively.

Resistance and Cross-resistance in Clinical Isolates from HSV-Infected Patients

Clinical HSV-1 and HSV-2 isolates obtained from patients who failed treatment with acyclovir for their α-herpesvirus infections were evaluated for genotypic changes in the TK and POL genes. These HSV isolates had frameshift mutations leading to loss of thymidine kinase or had substitutions in the viral thymidine kinase and viral DNA polymerase. Phenotypic analysis of these clinical isolates confirmed resistance to penciclovir and acyclovir. These and other resistance-associated substitutions reported in the literature, or observed in clinical trials, are listed in Table 2. The list is not all inclusive and additional changes will likely be identified in HSV variants isolated from patients who fail penciclovir containing regimens. The possibility of viral resistance to penciclovir should be considered in patients who fail to respond or experience recurrent viral shedding during therapy.


In clinical trials, systemic drug exposure following topical administration of penciclovir cream was negligible, as the penciclovir content of all plasma and urine samples was below the limit of assay detection (0.1 mcg/mL and 10 mcg/mL, respectively). However, for the purpose of inter-species dose comparisons presented in the following sections, an assumption of 100% absorption of penciclovir from the topically applied product has been used. Based on the use of the maximal recommended topical dose of penciclovir of 0.05 mg/kg/day and an assumption of 100% absorption, the maximum theoretical plasma AUC0-24 hrs for penciclovir is approximately 0.129 mcg.hr/mL.

Mutagenesis: When tested in vitro, penciclovir did not cause an increase in gene mutation in the Ames assay using multiple strains of S. typhimurium or E. coli (at up to 20,000 mcg/plate), nor did it cause an increase in unscheduled DNA repair in mammalian HeLa S3 cells (at up to 5,000 mcg/mL). However, an increase in clastogenic responses was seen with penciclovir in the L5178Y mouse lymphoma cell assay (at doses ≥1000 mcg/mL) and, in human lymphocytes incubated in vitro at doses ≥250 mcg/mL. When tested in vivo, penciclovir caused an increase in micronuclei in mouse bone marrow following the intravenous administration of doses ≥500 mg/kg (≥810x the maximum human dose, based on body surface area conversion).

Impairment of Fertility: Testicular toxicity was observed in multiple animal species (rats and dogs) following repeated intravenous administration of penciclovir (160 mg/kg/day and 100 mg/kg/day, respectively, approximately 1155 and 3255x the maximum theoretical human AUC). Testicular changes seen in both species included atrophy of the seminiferous tubules and reductions in epididymal sperm counts and/or an increased incidence of sperm with abnormal morphology or reduced motility.    Adverse testicular effects were related to an increasing dose or duration of exposure to penciclovir. No adverse testicular or reproductive effects (fertility and reproductive function) were observed in rats after 10 to 13 weeks dosing at 80 mg/kg/day, or testicular effects in dogs after 13 weeks dosing at 30 mg/kg/day (575 and 845x the maximum theoretical human AUC, respectively). Intravenously administered penciclovir had no effect on fertility or reproductive performance in female rats at doses of up to 80 mg/kg/day (260x the maximum human dose [BSA]).

There was no evidence of any clinically significant effects on sperm count, motility or morphology in 2 placebo-controlled clinical trials of Famvir® (famciclovir [the oral prodrug of penciclovir], 250 mg twice daily; n=66) in immunocompetent men with recurrent genital herpes, when dosing and follow-up were maintained for 18 and 8 weeks, respectively (approximately 2 and 1 spermatogenic cycles in the human).


Penciclovir was studied in two double-blind, placebo (vehicle)-controlled trials for the treatment of recurrent herpes labialis in which otherwise healthy adults were randomized to either penciclovir or placebo. Therapy was to be initiated by the subjects within 1 hour of noticing signs or symptoms and continued for 4 days, with application of study medication every 2 hours while awake. In both studies, the mean duration of lesions was approximately one-half-day shorter in the subjects treated with penciclovir (N=1,516) as compared to subjects treated with placebo (N=1,541) (approximately 4.5 days versus 5 days, respectively). The mean duration of lesion pain was also approximately one half-day shorter in the penciclovir group compared to the placebo group.


Penciclovir cream 1% is supplied in a 5 gram tube containing 10 mg of penciclovir per gram in a cream base, which is equivalent to 1% (w/w). The white cream is available as follows:

Advise the patient that treatment should be started at the earliest sign of a cold sore (i.e. tingling, redness, itching, or bump). Inform the patient to apply the cream every 2 hours during waking hours for 4 days and to wash their hands with soap and water after using penciclovir cream.

Brands listed are the trademarks of their respective owners.

For Topical Use Only 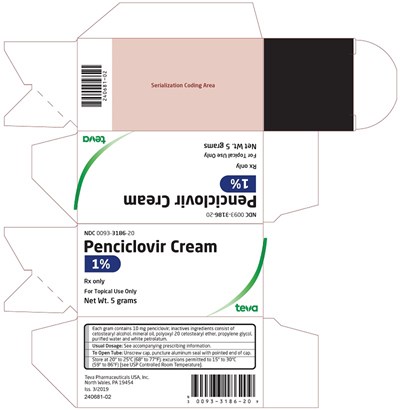