What are the uses for Vaxneuvance?

What are Vaxneuvance Active Ingredients?


For intramuscular use only.


Hold the prefilled syringe horizontally and shake vigorously immediately prior to use to obtain an opalescent suspension in the prefilled syringe. Do not use the vaccine if it cannot be resuspended. Parenteral drug products should be inspected visually for particulate matter and discoloration prior to administration. Do not use if particulate matter or discoloration is observed.


VAXNEUVANCE is a suspension for intramuscular injection supplied in a 0.5 mL single-dose prefilled syringe.


Do not administer VAXNEUVANCE to individuals with a severe allergic reaction (e.g., anaphylaxis) to any component of VAXNEUVANCE or to diphtheria toxoid. [See Description (11).]


Some individuals with altered immunocompetence, including those receiving immunosuppressive therapy, may have a reduced immune response to VAXNEUVANCE. [See Drug Interactions (7.1) and Use in Specific Populations (8.6).]

The clinical studies included adults with stable underlying medical conditions (e.g., diabetes mellitus, renal disorders, chronic heart disease, chronic liver disease, chronic lung disease including asthma) and/or behavioral risk factors (e.g., smoking, increased alcohol use) that are known to increase the risk of pneumococcal disease. Overall, the mean age of the participants was 58 years and 54.6% were female. The racial distribution was as follows: 72.3% were White, 9.9% were Asian, 8.1% were American Indian or Alaska Native, 7.4% were Black or African American, and 18.1% were of Hispanic or Latino ethnicity.

Across all studies, injection-site pruritus was reported to occur in up to 2.8% of adults vaccinated with VAXNEUVANCE.

There were no notable patterns or numerical imbalances between vaccination groups for specific categories of serious adverse events that would suggest a causal relationship to VAXNEUVANCE.

The safety profile was similar when VAXNEUVANCE was administered with or without inactivated quadrivalent influenza vaccine.


Immunosuppressive therapies may reduce the immune response to this vaccine [see Warnings and Precautions (5.1)].

Developmental toxicity studies have been performed in female rats administered a human dose of VAXNEUVANCE on four occasions; twice prior to mating, once during gestation and once during lactation. These studies revealed no evidence of harm to the fetus due to VAXNEUVANCE [see Animal Data below].

Developmental toxicity studies have been performed in female rats. In these studies, female rats received a human dose of VAXNEUVANCE by intramuscular injection on day 28 and day 7 prior to mating, and on gestation day 6 and on lactation day 7. No vaccine related fetal malformations or variations were observed. No adverse effect on pup weight up to post-natal day 21 was noted.

Human data are not available to assess the impact of VAXNEUVANCE on milk production, its presence in breast milk, or its effects on the breastfed child. The developmental and health benefits of breastfeeding should be considered along with the mother’s clinical need for VAXNEUVANCE and any potential adverse effects on the breastfed child from VAXNEUVANCE or from the underlying maternal condition. For preventive vaccines, the underlying condition is susceptibility to disease prevented by the vaccine.


The safety and effectiveness of VAXNEUVANCE in individuals younger than 18 years of age have not been established.

In a double-blind, descriptive study (Study 7), the safety and immunogenicity of VAXNEUVANCE were evaluated in pneumococcal vaccine-naïve HIV-infected adults 18 years of age and older, with CD4+ T-cell count ≥50 cells per microliter and plasma HIV RNA value <50,000 copies/mL. Participants were randomized to receive VAXNEUVANCE (N=152) or Prevnar 13 (N=150), followed by PNEUMOVAX 23 two months later [see Adverse Reactions (6.1)]. Anti-pneumococcal opsonophagocytic activity (OPA) geometric mean antibody titers (GMTs) were higher after administration of VAXNEUVANCE, compared to pre-vaccination, for the 15 serotypes contained in VAXNEUVANCE. After sequential administration with PNEUMOVAX 23, OPA GMTs observed at 30 days after PNEUMOVAX 23 vaccination were numerically similar between the two vaccination groups for all 15 serotypes contained in VAXNEUVANCE. The safety profile of VAXNEUVANCE was similar between the two vaccination groups. The effectiveness of VAXNEUVANCE in HIV-infected individuals has not been evaluated.

Each of the fifteen serotypes is manufactured independently using the same manufacturing steps with slight variations to accommodate for differences in strains, polysaccharides and process stream properties. Each S. pneumoniae serotype is grown in media containing yeast extract, dextrose, salts and soy peptone. Each polysaccharide is purified by a series of chemical and physical methods. Then each polysaccharide is chemically activated and conjugated to the carrier protein CRM197 to form each glycoconjugate. CRM197 is isolated from cultures grown in a glycerol-based, chemically-defined, salt medium and purified by chromatography and ultrafiltration. The final vaccine is prepared by blending the fifteen glycoconjugates with aluminum phosphate adjuvant in a final buffer containing histidine, polysorbate 20 and sodium chloride.

The tip cap and plunger stopper of the prefilled syringe are not made with natural rubber latex.


Protection against invasive disease is conferred mainly by opsonophagocytic killing of S. pneumoniae. VAXNEUVANCE induces opsonophagocytic activity against the serotypes contained in the vaccine.


VAXNEUVANCE has not been evaluated for carcinogenic or mutagenic potential or for impairment of male fertility in animals. VAXNEUVANCE administered to female rats had no effect on fertility [see Use in Specific Populations (8.1)].


Immune responses elicited by VAXNEUVANCE and Prevnar 13 were measured by a multiplexed opsonophagocytic antibody assay (MOPA) for the 15 pneumococcal serotypes contained in VAXNEUVANCE pre- and post- vaccination.

Study 1 assessed serotype-specific opsonophagocytic activity (OPA) responses for each of the 15 serotypes contained in VAXNEUVANCE at 30 days postvaccination in a double-blind, active comparator-controlled study that enrolled pneumococcal vaccine-naïve participants 50 years of age and older. Participants were randomized to receive either VAXNEUVANCE (N=604) or Prevnar 13 (N=601) at sites in USA, Canada, Spain, Taiwan, and Japan. The mean age of participants was 66 years and 57.3% were female. The racial distribution was as follows: 67.7% were White, 25.1% were Asian, 6.1% were Black or African American and 22.0% were of Hispanic or Latino ethnicity.

In a double-blind, active comparator-controlled, descriptive study (Study 3), pneumococcal vaccine-naïve adults 50 years of age and older were randomized to receive either VAXNEUVANCE (N=327) or Prevnar 13 (N=325), followed by PNEUMOVAX 23 one year later.

Following vaccination with PNEUMOVAX 23, OPA GMTs were numerically similar between the two vaccination groups for the 15 serotypes in VAXNEUVANCE.

In a double-blind, descriptive study (Study 4), adults 18 through 49 years of age, including individuals with increased risk of developing pneumococcal disease, were randomized to receive VAXNEUVANCE (N=1,135) or Prevnar 13 (N=380), followed by PNEUMOVAX 23 six months later [see Adverse Reactions (6.1)]. Among those who received VAXNEUVANCE, 620 participants had one risk factor and 228 participants had two or more risk factors for pneumococcal disease.

Table 5 presents OPA GMTs in the overall study population for each of the 15 serotypes 30 days following vaccination with VAXNEUVANCE or Prevnar 13.

Following vaccination with PNEUMOVAX 23, the OPA GMTs for the 15 serotypes in VAXNEUVANCE were numerically similar among subjects who had received VAXNEUVANCE or Prevnar 13 for the first vaccination.


VAXNEUVANCE is supplied as follows:

Do not freeze. Protect from light.

The tip cap and plunger stopper of the prefilled syringe are not made with natural rubber latex.

Discuss the following with the patient:

For use in individuals 18 years of age and older 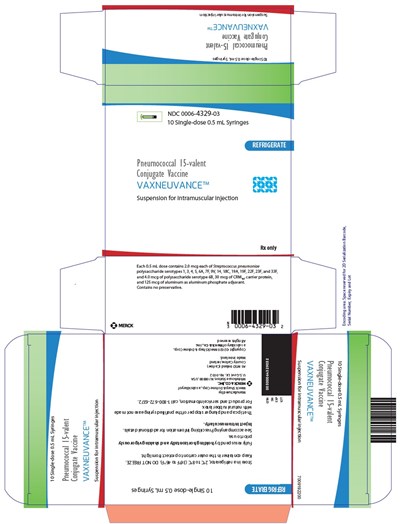