Fosaprepitant is used with other medications to help prevent nausea and vomiting caused by cancer drug treatment (chemotherapy). Fosaprepitant works by blocking one of the body's natural substances (substance P/neurokinin 1) that causes vomiting. This medication will not treat nausea or vomiting that has already started. Ask your doctor what you should do if you already have nausea or vomiting.

Fosaprepitant Dimeglumine is a human prescription drug product labeled by Hikma Pharmaceuticals Usa Inc.. The product's dosage form is injection, powder, lyophilized, for solution and is administered via intravenous form.

What are Fosaprepitant Dimeglumine Active Ingredients?


Fosaprepitant  for Injection, in combination with other antiemetic agents, is indicated in adults for the prevention of:

2.1 Prevention Of Nausea And Vomiting Associated With Hec And Mec In Adult Patients


The recommended dosage of fosaprepitant for injection, dexamethasone, and a 5-HT3 antagonist for the prevention of nausea and vomiting associated with administration of HEC or MEC in adults is shown in Table 1 or Table 2, respectively. Administer fosaprepitant for injection as an intravenous infusion on Day 1 over 20 to 30 minutes, completing the infusion approximately 30 minutes prior to chemotherapy.

2.3 Preparation Of Fosaprepitant For Injection


Caution: Do not mix or reconstitute fosaprepitant for injection with solutions for which physical and chemical compatibility have not been established. Fosaprepitant for Injection is incompatible with any solutions containing divalent cations (e.g., Ca2+, Mg2+), including Lactated Ringer's Solution and Hartmann's Solution.


Fosaprepitant for Injection is contraindicated in patients:


Serious hypersensitivity reactions, including anaphylaxis and anaphylactic shock, during or soon after infusion of fosaprepitant for injection have occurred. Symptoms including flushing, erythema, dyspnea, hypotension and syncope have been reported [see Adverse Reactions (6.2)].

Monitor patients during and after infusion. If hypersensitivity reactions occur, discontinue the infusion and administer appropriate medical therapy. Do not reinitiate fosaprepitant for injection in patients who experience these symptoms with previous use [see Contraindications (4)].


Infusion site reactions (ISRs) have been reported with the use of fosaprepitant for injection [see Adverse Reactions (6.1)]. The majority of severe ISRs, including thrombophlebitis and vasculitis, were reported with concomitant vesicant (anthracycline-based) chemotherapy administration, particularly when associated with extravasation. Necrosis was also reported in some patients with concomitant vesicant chemotherapy. Most ISRs occurred with the first, second or third exposure to single doses of fosaprepitant for injection and in some cases, reactions persisted for two weeks or longer. Treatment of severe ISRs consisted of medical, and in some cases surgical, intervention.

Avoid infusion of fosaprepitant for injection into small veins or through a butterfly catheter. If a severe ISR develops during infusion, discontinue the infusion and administer appropriate medical treatment.

5.4 Decrease In Inr With Concomitant Warfarin


Coadministration of fosaprepitant for injection with warfarin, a CYP2C9 substrate, may result in a clinically significant decrease in the International Normalized Ratio (INR) of prothrombin time [see Clinical Pharmacology (12.3)]. Monitor the INR in patients on chronic warfarin therapy in the 2-week period, particularly at 7 to 10 days, following initiation of fosaprepitant for injection with each chemotherapy cycle [see Drug Interactions (7.1)].


The following clinically significant adverse reactions are described elsewhere in the labeling:

The overall safety of fosaprepitant for injection was evaluated in approximately 1600 adult patients.


The following adverse reactions have been identified during post-approval use of fosaprepitant. Because these reactions are reported voluntarily from a population of uncertain size, it is not always possible to reliably estimate their frequency or establish a causal relationship to drug exposure.

7.1 Effect Of Fosaprepitant/Aprepitant On The Pharmacokinetics Of Other Drugs


When administered intravenously, fosaprepitant, a prodrug of aprepitant, is converted to aprepitant within 30 minutes. Therefore, drug interactions following administration of fosaprepitant for injection are likely to occur with drugs that interact with oral aprepitant.

Some substrates of CYP3A4 are contraindicated with fosaprepitant for injection [see Contraindications (4)]. Dosage adjustment of some CYP3A4 and CYP2C9 substrates may be warranted, as shown in Table 7.

7.2 Effect Of Other Drugs On The Pharmacokinetics Of Fosaprepitant/Aprepitant


Aprepitant is a CYP3A4 substrate [see Clinical Pharmacology (12.3)]. Co-administration of fosaprepitant for injection with drugs that are inhibitors or inducers of CYP3A4 may result in increased or decreased plasma concentrations of aprepitant, respectively, as shown in Table 8.


The safety and effectiveness of fosaprepitant for injection for the prevention of nausea and vomiting associated with HEC or MEC have not been established in patients less than 6 months of age.

In a toxicity study in juvenile dogs treated with fosaprepitant from postnatal day 14 (equivalent to a newborn human) to day 42 (approximately equivalent to a 2 year old human), decreased testicular weight and Leydig cell size were seen in the males at 6 mg/kg/day and increased uterine weight, hypertrophy of the uterus and cervix, and edema of vaginal tissues were seen in females from 4 mg/kg/day. A study was also conducted in young rats to evaluate the effects of aprepitant on growth and on neurobehavioral and sexual development. Rats were treated at oral doses up to the maximum feasible dose of 1000 mg/kg twice daily from the early postnatal period (Postnatal Day 10 (equivalent to a newborn human) through Postnatal Day 58 (approximately equivalent to a 15 year old human)). Slight changes in the onset of sexual maturation were observed in female and male rats; however, there were no effects on mating, fertility, embryonic-fetal survival, or histomorphology of the reproductive organs. There were no effects in neurobehavioral tests of sensory function, motor function, and learning and memory.


Of the 1649 adult cancer patients treated with intravenous fosaprepitant for injection in HEC and MEC clinical studies, 27% were aged 65 and over, while 5% were aged 75 and over. Other reported clinical experience with fosaprepitant for injection has not identified differences in responses between elderly and younger patients. In general, use caution when dosing elderly patients as they have a greater frequency of decreased hepatic, renal or cardiac function and concomitant disease or other drug therapy [see Clinical Pharmacology (12.3)].


There is no specific information on the treatment of overdosage with fosaprepitant or aprepitant.

Aprepitant is not removed by hemodialysis.

Fosaprepitant dimeglumine is a white or off-white amorphous powder with a molecular weight of 1004.83. It is freely soluble in water.

Each vial of fosaprepitant for injection for administration as an intravenous infusion contains 150 mg of fosaprepitant (equivalent to 245.3 mg of fosaprepitant dimeglumine) and the following inactive ingredients: edetate disodium (5.4 mg), polysorbate 80 (75 mg), lactose anhydrous (375 mg), sodium hydroxide and/or hydrochloric acid (for pH adjustment).


Fosaprepitant is a prodrug of aprepitant and accordingly, its antiemetic effects are attributable to aprepitant.

Aprepitant is a selective high-affinity antagonist of human substance P/neurokinin 1 (NK1) receptors. Aprepitant has little or no affinity for serotonin (5-HT3), dopamine, and corticosteroid receptors, the targets of existing therapies for chemotherapy-induced nausea and vomiting (CINV). Aprepitant has been shown in animal models to inhibit emesis induced by cytotoxic chemotherapeutic agents, such as cisplatin, via central actions. Animal and human Positron Emission Tomography (PET) studies with aprepitant have shown that it crosses the blood brain barrier and occupies brain NK1 receptors. Animal and human studies have shown that aprepitant augments the antiemetic activity of the 5-HT3-receptor antagonist ondansetron and the corticosteroid dexamethasone and inhibits both the acute and delayed phases of cisplatin-induced emesis.

14.1 Prevention Of Nausea And Vomiting Associated With Hec In Adults


In a randomized, parallel, double-blind, active-controlled study, fosaprepitant for injection 150 mg as a single intravenous infusion (N=1147) was compared to a 3-day oral aprepitant regimen (N=1175) in patients receiving a HEC regimen that included cisplatin (≥70 mg/m2). All patients in both groups received dexamethasone and ondansetron (see Table 11). Patient demographics were similar between the two treatment groups. Of the total 2322 patients, 63% were men, 56% White, 26% Asian, 3% American Indian/Alaska Native, 2% Black, 13% Multi-Racial, and 33% Hispanic/Latino ethnicity. Patient ages ranged from 19 to 86 years of age, with a mean age of 56 years. Other concomitant chemotherapy agents commonly administered were fluorouracil (17%), gemcitabine (16%), paclitaxel (15%), and etoposide (12%).

14.2 Prevention Of Nausea And Vomiting Associated With Mec In Adults


In a randomized, parallel, double-blind, active comparator-controlled study, fosaprepitant for injection 150 mg as a single intravenous infusion (N=502) in combination with ondansetron and dexamethasone (fosaprepitant for injection regimen) was compared with ondansetron and dexamethasone alone (standard therapy) (N=498) (see Table 13) in patients receiving a MEC regimen. Patient demographics were similar between the two treatment groups. Of the total 1,000 patients included in the efficacy analysis, 41% were men, 84% White, 4% Asian, 1% American Indian/Alaska Native, 2% Black, 10% Multi-Racial, and 19% Hispanic/Latino ethnicity. Patient ages ranged from 23 to 88 years of age, with a mean age of 60 years. The most commonly administered MEC chemotherapeutic agents were carboplatin (51%), oxaliplatin (24%), and cyclophosphamide (12%).

The primary endpoint was complete response (defined as no vomiting and no rescue therapy) in the delayed phase (25 to 120 hours) of chemotherapy-induced nausea and vomiting. The results by treatment group are shown in Table 14.


Single-dose glass vial containing 150 mg of fosaprepitant as a white to off-white lyophilized powder for reconstitution. Supplied as follows:

STERILE LYOPHILIZED POWDER
FOR INTRAVENOUS USE ONLY AFTER
RECONSTITUTION AND DILUTION

DO NOT USE WITH SOLUTIONS
CONTAINING DIVALENT CATIONS
(e.g., Ca2+, Mg2+) INCLUDING
LACTATED RINGER'S SOLUTION
AND HARTMANN'S SOLUTION. 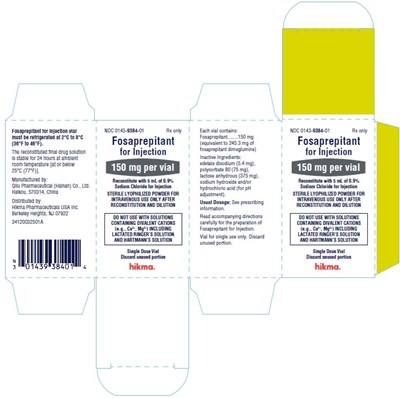